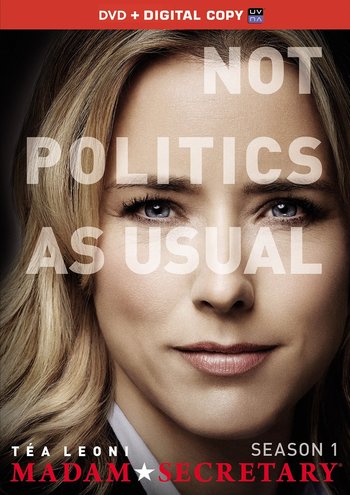 Madam Secretary is a CBS Government Procedural TV series (2014-2019) revolving, as the name implies, around a female US Secretary of State. The series is executive-produced by Lori Mc Creary and Morgan Freeman.

Dr. Elizabeth Adams McCord (Téa Leoni) is a retired CIA officer-turned-professor living a Happily Married life on a horse farm in Virginia when the president drops in for a visit. Seems the previous Secretary of State died an untimely death and the President had actually wanted her for the job from the beginning. She takes the job, even though it means uprooting her family to Washington D.C.

Then two months in, she learns that her predecessor's death may not have been accidental.

Like most of CBS's shows of The New '10s, the series is primarily episodic in nature, with the A-plot being geopolitical drama of some stripe, accompanied by various B-plots surrounding the lives of Liz's staff and family, and a season-long Story Arc dealing with major geopolitical events.

that the series would end after a shortened season six.

Has a Recap page in dire need of Wiki Magic Love.