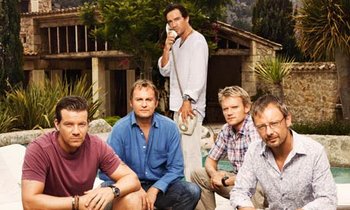 A holiday to die for.
"In prosperity, your friends know you. In adversity, you know your friends."
— Mad Dogs Tagline
Advertisement:

Mad Dogs (2011-13) is a British dramedy in which four old college friends, played by The Master, Gene Hunt, Danny Blue and that guy from the adverts reunite with the newly successful fifth member of their gang, Alvo, at his new villa in Mallorca. Things take a dark turn when Alvo steals a "friend's" boat, dragging his friends into his own vengeance.

And then Tony Blair shoots somebody.

Tensions build as the Four-Philosophy Ensemble are caught in the middle of a nightmare of murder, drugs and corruption and the difficult pasts and conflicting opinions threaten to tear the group apart... did we mention Tony Blair shoots someone?

The series ran for three four-part series before a two-part finale at Christmas 2013.