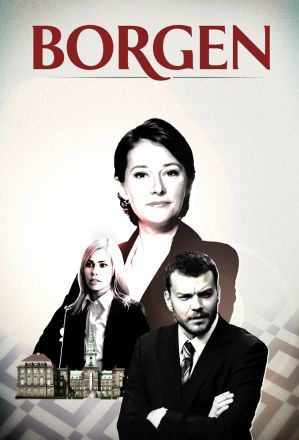 DR, the broadcaster who brought you Forbrydelsen, now bring you The West Wing... in Denmark.

"Borgen" is Danish for "The Castle", a nickname for the Christiansborg Palace, the centre of the Danish government. The actual Danish pronunciation is more like "Bauwen". (DR marketed the series with the overseas title Government, but The BBC and Link TV chose to use the Untranslated Title when transmitting it in English.) The show is a Danish Government Procedural by Adam Price, running from 2010 to 2013. It has been critically acclaimed for its realistic fictional parties and its lack of strawman stereotypes, getting very high ratings in Denmark. The main character is Prime Minister Birgitte Nyborg Christensen (Sidse Babett Knudsen), a minor centrist politician who becomes the first female Prime Minister of Denmark against all odds, and who is trying to balance politics, personal problems and her two kids.

The third and final season was shown in Denmark in late 2012, and abroad in Britain and Australia in 2013. In 2020, it was announced that the series will revived for a fourth season in 2022, after a deal was struck between DR and Netflix. The fourth season, called Borgen: Power & Glory, ran in Denmark from February to April, 2022.