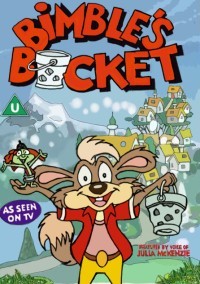 Cult CITV children's Animated Series from the mid 1990s. Created by Mike Jupp and Martin Gates Productions as a Spiritual Successor to their previous project The Dreamstone.

The show follows Bimble, who comes into possession of a magical wish granting bucket, occupied by the miniature elf-like Teeny Weeny. Soon, nearby despot Queen Kak of Sleaze City and her Sleezian minions comes to know of this bucket, with bumbling witch Dolly Clackhanger and her Mooks often attempting to steal to appease their queen. Similar to its predecessor, the show follows a simplistic formula, usually revolving around the villains bungling attempts to steal the bucket, though it was kept fresh by an ongoing continuity.

The show ran for three seasons from 1996 to 1998. While the first series was a standard 22 minute show, the second and third were downgraded into ten minute shorts.

Though the show slipped into obscurity for a fair while after airing, the company Monster Entertainment, who own the rights to all the shows in Martin Gates' catalogue, have streamed episodes of the show on their official Youtube account.

Queen Kak is about as repulsive, cruel, selfish, and miserable as a ruler can get.

Queen Kak is about as repulsive, cruel, selfish, and miserable as a ruler can get.