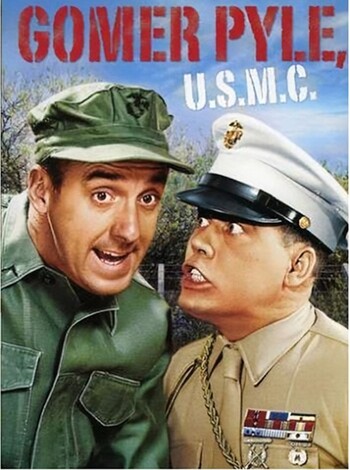 Welcome to the Armed Farces.
Advertisement:

Gomer Pyle (Jim Nabors) was the bumbling gas station attendant on The Andy Griffith Show. However, Gomer became so popular, he was eventually put right in his own spin-off. The series ran on CBS from 1964 to 1969, a total of 150 episodes in five seasons.

Here, Pyle enlists in the United States Marine Corps. Every episode has Pyle doing something crazy, mostly enraging his superior, Sergeant Vince Carter (Frank Sutton), who should not be confused with the basketball player of that name.

Not to be confused with the "Gomer Pyle" of Full Metal Jacket, though Gunnery Sergeant Hartman most likely used the show and the character as inspiration for "renaming" the recruit in question.