Film / Get Your Man 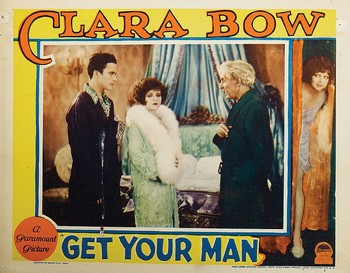 As children, Simone de Villeneuve and Robert de Bellecontre were betrothed to each other. Seventeen years later they meet again as adults. Unfortunately, Robert has since fallen for another woman named Nancy Worthington.

Get Your Man is a 1927 Romantic Comedy starring Clara Bow and Charles "Buddy" Rogers. The film is based on the play Tu m'épouseras!. It is currently in the Public Domain. The current versions of Get Your Man, like many silent films, is incomplete. It's missing two out of its six reels.

Get Your Man provides example of: