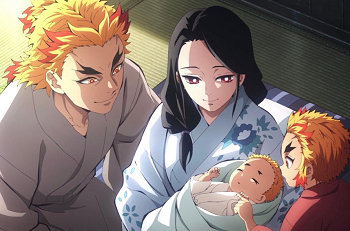 Seen that ridiculous hairstyle? Turns out it's hereditary. Most of the time, it's an Improbable Hairstyle and often a subtrope of Anime Hair. It is also a type of Strong Family Resemblance. For a similar trope that may overlap, but deals with hair color rather than style, see Hair Color Spoiler. May be part of Generation Xerox.