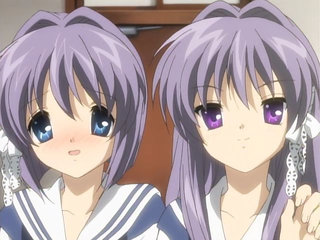 A sub-trope of Anime Hair, this hairstyle resembles the hood scoops on a muscle car and also looks a bit like cat ears, allowing for the visual appeal of the Cat Girl in series that are too "realistic" to actually feature such a supernatural creature. They can also be used to suggest a resemblence to a machine, again, without the work nessesarily featuring something like a Robot Girl. Seems to be more common among females, though male examples are plentiful as well.

The trend started in the late 90s and continued in the early 2000s, most likely popularized by Sakura Kinomoto of Cardcaptor Sakura.

Seems to be especially prevalent in Visual Novels.