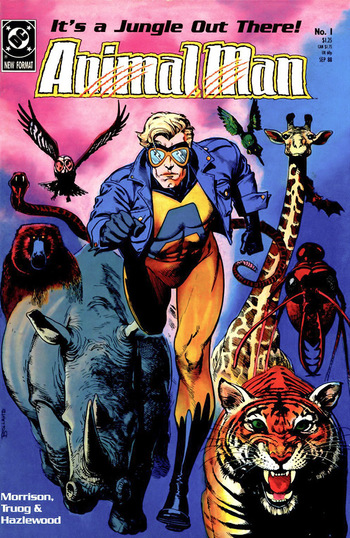 Animal Man, Animal Man, doing the things an Animal can....
Who makes us suffer this way?
Who writes the world?
Advertisement:

Buddy Baker, also known as Animal Man, was one of many Super Heroes created during the 1960s. He first appeared in Strange Adventures #180 (September, 1965). Created by writers France Herron and Dave Wood, and artist Carmine Infantino. The new character was about as fun and exciting as wet cardboard. He could take the abilities of any animal who was nearby and was granted this power by yellow aliens. He mainly used it to be a Flying Brick, though.

Until 1988, when Grant Morrison was given the chance to write Buddy's new series. Then, Buddy became more than just your generic superhero: he started caring about animals, fighting for animal rights. There was also the drama of his family, who fully knew he was a superhero and tried to support it. And then things took a turn for the weird...

Morrison managed to combine family drama, animal rights activism, superheroics, and a heaping helping of Meta Fiction to make this one of the most memorable comic books ever. It's brilliant, poignant, heartbreaking, and heartwarming at the same time.

Morrison left after issue #26, and the series continued for another sixty-odd issues, eventually coming under the Vertigo imprint — but Morrison remains the defining run on the title. Animal Man continued to make appearances across The DCU, including a starring role in 52 (co-written by Morrison).

In September of 2011, Animal Man was one of the characters receiving a series as part of the line wide New 52 relaunch. The new series, written by Jeff Lemire, deals with Buddy and his family dynamics, chiefly his daughter Maxine developing her own powers, as well as his attempts to protect "The Red". The series is a very dark one, and met with much critical acclaim before ending after 29 issues. Buddy himself continued to be written by Lemire though, this time featuring in his team book, Justice League United, until that ended after 17 issues.

In 2012, Animal Man made his animation debut in a series of shorts as part of Cartoon Network's DC Nation block, voiced by "Weird Al" Yankovic.