Literature / The Book of the Dun Cow 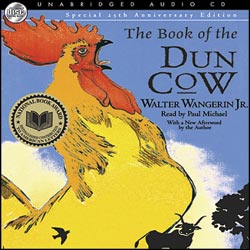 It won an award, and it's a children's book. You know what to expect...
Advertisement:

The Book of the Dun Cow is a children's novel written by Walter Wangerin, Jr. It follows the story of Chauntecleer, a rooster from before the creation of man. He's the leader of a small coop and the land that surrounds it, as he tries to get accustomed to an unwelcomed guest, Mundo Cani, and stop somebody who's eating the eggs. But, after that's over with, he receives refugees fleeing from the land to the west, ruled by Cockatrice. Senex, the former ruler, wanted a son, even though he was impotent, and went about solving his problem the wrong way. Thus, his son, Cockatrice, was born of him and the giant evil Wyrm locked under the Earth by the natural goodness of the animals on the surface. Eventually, Cockatrice kills everything in his land with his basilisk offspring. God sends his messenger, the Dun Cow, to Chauntecleer, and then seals off Earth from the rest of the universe with rain clouds. Eventually, Cockatrice starts attacking Chauntecleer's land with basilisks, and Chauntecleer calls the animals of his land to defend it. Bloodshed ensues.

A sequel was written titled The Book of Sorrows, which is about as cheerful as you expect. It was later rewritten and reissued as The Book of the Dun Cow: Lamentations and followed by a third book, Peace at Last, published 23 years after the second book.

The book is in fact named after an ancient Irish manuscript which contains both Christian records and ancient Celtic legends.

This book and The Book of Sorrows provide examples of:

Lamentations and Peace at the Last provide examples of:

Alternative Title(s): The Book Of Sorrows