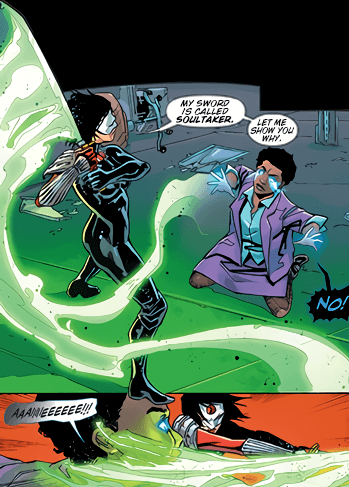 "The Soul Reaver, Kain's ancient blade. Older than any of us, and a thousand times more deadly. The legends claimed that the blade was possessed, and thrived by devouring the souls of its victims. For all our bravado, we knew what it meant when Kain drew the Soul Reaver in anger....it meant you were dead."
— Raziel about the Soul Reaver, Legacy of Kain: Soul Reaver
Advertisement:

Exactly What It Says on the Tin. It's a blade so sharp or evil or both that it can harm the soul itself; alternatively, it actually has a magical nature that allows it to affect souls (and often similar kinds of typically incorporeal entities, such as ghosts and demons). It may cause pains on the soul for the affected. Some particularly sinister weapons actually consume souls. It's usually noted as a One-Hit Kill weapon. It's often an Infinity +1 Sword and/or Immortal Breaker as well.

The ability to affect souls doesn't make something evil in and of itself, however:

Most incarnations of The Grim Reaper or a Psychopomp use their scythe to separate the soul from the body, or something along those lines.

Fridge Logic also leads to the conclusion that in settings where (for want of a better word) surgery on souls is possible, it would have to be done with something like this.