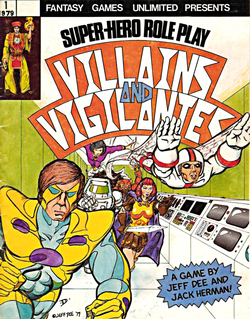 First put out by Fantasy Games Unlimited in 1979, Villains and Vigilantes was the first complete superhero Tabletop RPG ever published (only preceded by Superhero 2044, a science fiction game with some superhero elements).

The game was somewhat unique (and to some, ludicrous) for its character creation system. Namely, values such as strength, intelligence, health, etc. for player characters were approximated by the GM from those values in the person playing the character. Powers were acquired by rolling dice and consulting a series of tables, sometimes resulting in bizarre combinations.

A revised second edition was released in 1982.

In 1986 FGU partnered with Eclipse Comics to release a four-issue Villains & Vigilantes mini-series that was largely a retelling of the introductory adventure "Crisis at Crusader Citadel" (which has the players applying to the Crusaders, the local hero team, but having to stand in for them when the Crusaders go AWOL just before a superhuman crime wave). Incidentally, a sourcebook for The DNAgents comic, run by the same company, was released for use with V&V the same year.

Publishing new content petered off by the late 80's. After a long hiatus, in 2010 Fantasy Games Unlimited began releasing new material for the game, including quite a bit that had apparently just been sitting around unpublished since the game's heyday in the 80's. A legal battle between Fantasy Games Unlimited and original designers Jeff Dee and Jack Herman over the trademark ended with Dee and Herman being awarded ownership of the game, and being able to license the trademark from FGU.

Over August-September 2016, Dee and Herman successfully ran a Kickstarter for a third edition