A darkness youkai and stage 1 boss. She wears a ribbon that's actually a magic amulet that she can't touch. She has the ability to envelope her surroundings in darkness, usually by creating a sphere of darkness around herself. Rumia has the distinction of being the first boss in the series to fight using the modern Spell Card rules.

A fairy who lives at the same lake as Cirno and is the midboss of her stage. Intended as just nameless Mini-Boss, but become unexpectedly popular among fans, and was consequently semi-canonized as Cirno's Recurring Extra best friend.

Ice Fairy of the Lake
Cirno

"When it comes to me, I am the strongest!"

An ice fairy who can manipulate the cold who lives at the lake surrounding the Scarlet Devil Mansion, and one of the series most persistent sources of comic relief. Her favorite hobby is freezing frogs and watching them thaw. She boasts that she is the strongest fairy of them all, though considering how weak fairies are in general, it gives you a good indication just how bright she is.

"You're not allowed past this point!"

Head gate guard and gardener for the Scarlet Devil Mansion and stage 3 boss, a Chinese master of martial arts and physical combat who controls qi to enhance her attacks. Note that Hong is her family name while Meiling is her given name. Unlike the Japanese names, this usually isn't reversed in translation to English, possibly to preserve an element of foreignness.

One of the many lesser youkai found in the Scarlet Devil Mansion. Like Daiyousei, she had no name, dialogue, or profile included with the game, and was instead given her descriptive name by fans. The appellation seems to have been adopted by ZUN himself, but it may just be referring to her species.

"You, clothed in red and white! Don't cause problems in my study."

Librarian and tutor for the Scarlet Devil Mansion household, and stage 4 boss. Patchouli is known as the "One-Week Wizard" due to her mastery of the seven elements of the Japanese calendar week. She is indeed a powerful elementalist, but has poor health, which limits her battle prowess.

"Your time is mine."

Chief Maid of the Scarlet Devil Mansion, and a recurring secondary heroine. Despite being the leader of the maids at the Scarlet Devil Mansion, Sakuya usually has to do all of the work herself because the fairy maids are completely useless. Uses knives and time manipulation to fight and do maid tasks. Much of Sakuya's origin is left to speculation, although it is implied that she may not be human and "Sakuya" may not be her real name. 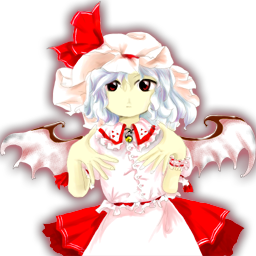 "The moon tonight is red. You will know death."

Vampiric mistress of the Scarlet Devil Mansion, and Final Boss of Embodiment of Scarlet Devil. She is the source of the mist that blotted out the sun, because sunlight is harmful to her. (It turns out she can just use a parasol, though.) Feared by many youkai, she is incredibly vain and proud despite her relatively low position in the hierarchy of Gensokyo, (falsely) claiming to be a descendant of Vlad Tepes himself and is very open about her being one of the few youkai that still eat humans, though she rarely takes enough blood to kill them. 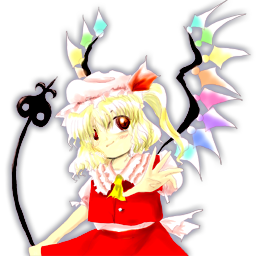 The Sister of the Devil
Flandre Scarlet

"I've been sleeping in the basement. For about 495 years."

Younger sister of Remilia Scarlet and the extra stage boss. She possesses the power to destroy anything at will, but due to her immaturity and mental instability, she's been kept locked up in the mansion basement for around 495 years. Despite this, she doesn't usually try to escape, and is actually quite fond of her older sister. Foul Detective Satori shows that she isn't as immature or unstable as she looks, allowing herself to be locked up in the basement because she had all her needs and wants taken care of. This revelation surprises even Sakuya, who was under the assumption she was locked up unwillingly.