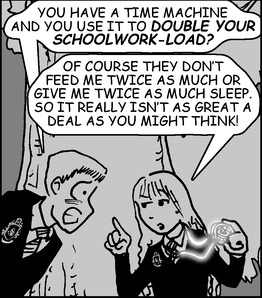 Characters are often pressed for time. Maybe they overbook themselves for a specific time period, or maybe they just have a very busy life in general, what with having the Wake Up, Go to School, Save the World all the time. Perhaps they have a deadline that is just physically impossible to meet in the allotted time.

Well, not to worry: All they have to do is create more time, using Magic and Powers or Applied Phlebotinum.

Favorite methods include Time Travel (But be careful, San Dimas Time stops for nobody,) Year Inside, Hour Outside, and Narnia Time, however there can also be other ways of accomplishing this. This is often a form of Mundane Utility.

...but eventually gets quite used to it, to the point where he has to be magically restricted from using it more often than the intended two turns per day.