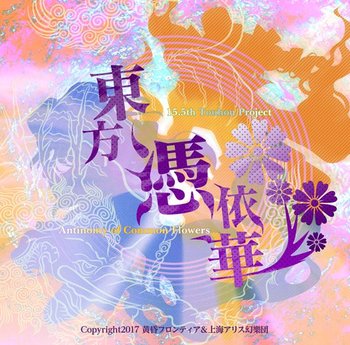 The Master chooses, the Slave obeys.
The bittersweet story of those who mistook themselves for the strongest duo is about to begin.
Advertisement:

Touhou Hyouibananote "Possession Flowers" ~ Antinomy of Common Flowers is a video game created by Team Shanghai Alice and Twilight Frontier for Windows computers in 2017, with Playstation 4 and Nintendo Switch ports releasing in Spring 2021. It's the 15.5th videogame installment in the Touhou Project franchise.

The source of the Urban Legend Incident may have been resolved, but its effects are yet to fade from Gensokyo. Taking advantage of it, someone has brought to life the phenomenon of Perfect Possession — a simple method by which anyone can possess another person, then replace that person's mind and body with their own. Deciding that the best way to figure out the technique's quirks and weaknesses is to try it out for themselves, a number of characters pair up and start searching for the ones behind it.

A Sequel to Touhou Shinpiroku ~ Urban Legend in Limbo, this game features the Master and Slave mechanic — a combination of Tag Team and Super Mode in which the "Master" character can expend some of their Occult Meter to temporarily switch to a powered-up version of the "Slave". For more detailed gameplay information, see the wiki

(in Japanese). The game's available on Steam here