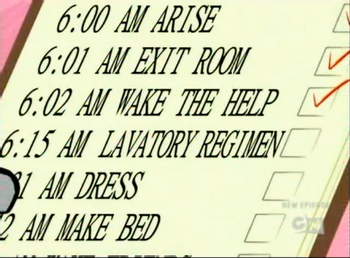 "Consistent is the life I lead!"
"Some part has malfunctioned and must be replaced. It will require at least an hour. This sends Effie into a state. She pulls out her schedule and begins to work out how the delay will impact every event for the rest of our lives."
— Catching Fire
Advertisement:

This is a character who has to do everything according to precise schedule, every day of their lives. You could set your watch by them. This is often portrayed as being unhealthy and/or tied in with some kind of mental condition. Obviously, watching someone go about things the same way for the entire story would get very dull, so the plot generally forces them to break this schedule at some point. Characters with OCD can get very stressed when someone messes with their schedule.

See also Clock King, someone who knows not only their own schedule but also everyone else's. Compare Obsessed Are the Listmakers, where a character shows fanaticism towards some other organized list.

SpongeBob takes planning a party WAY too seriously, by setting a schedule with strictly scheduled events.

SpongeBob takes planning a party WAY too seriously, by setting a schedule with strictly scheduled events.