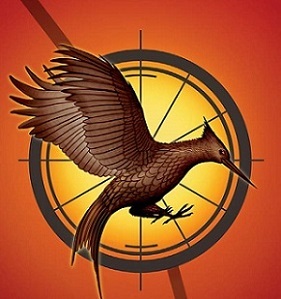 "Katniss Everdeen, the girl who was on fire, you have provided a spark that, left unattended, may grow into an inferno that destroys Panem."
— President Snow
Advertisement:

Catching Fire is the second book in The Hunger Games trilogy by Suzanne Collins, and is followed by Mockingjay.

Catching Fire addresses the aftermath of the 74th Hunger Games, in which both Katniss and Peeta were crowned as victors. Their – and especially, Katniss's – ability to defy the Capitol leads others throughout the districts of Panem to rise up against the Capitol. President Snow, however, does not take this lightly and demands that Katniss convince the people of Panem that her actions were motivated by love not rebellion. When this strategy proves to less than successful, Snow hatches another scheme to end the threat of Katniss Everdeen and district rebellion once and for all.

Note: The title event of this book series is a fight to the death. As such, Death Tropes and death-related spoilers are plentiful. Proceed with caution.
Advertisement: