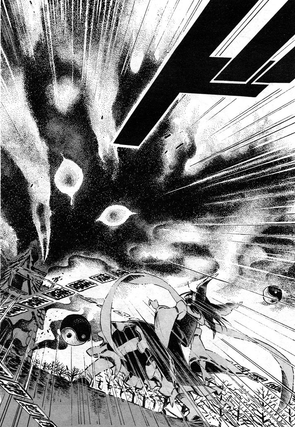 Not all youkai in Gensokyo are Cute Monster Girls.
"Our village of honest men originally consisted of only eight people.
We all picked up and moved to a mountain in the east. Two years of honestly boring daily life passed us by.
One day, one of us found a little hole in a peach tree.
Yes, that was the day we were lost in this paradise.
And right away, I stopped being human."
—Dolls In Pseudo Paradise opening words.

Gensokyo is host to over a hundred assorted Cute Monster Girls who can potentially toss as many bullets at you. However, even though being surrounded by such a massive amount of girls might seem like something fun at first, that doesn't mean Gensokyo is a hospitable place of marzipan and kittens. The aforementioned amounts of bullets thrown at you, the possibility of death, the potential of some of these monster girls, and the very real possibility that Yukari just might pop in one day and spirit you away are just some of the many horrors that await you in the rural world that is Gensokyo...

"There are eight less people in this paradise, "Gensokyo", and seven corpses were carried off by youkai. Gensokyo has lost these honest men forever. It's just a change in the population count.
Not important news in the least."
—Dolls In Pseudo Paradise ending words.