Literature / A Murder Is Announced 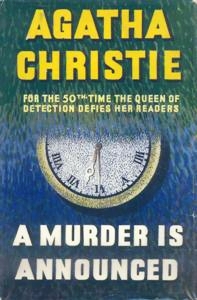 'In an English village, you turn over a stone and have no idea what will crawl out.'
— Miss Marple
Advertisement:

'A murder is announced and will take place on Friday, October 5th, at Little Paddocks at 6:30 pm. Friends please accept this, the only intimation.'

So goes the advertisement that stirs up the sleepy little village of Chipping Cleghorn. That night, a dozen people come together to witness the murder, including the inhabitants of Little Paddocks, all of them equally clueless about the situation. Or are they? When the clock strikes six thirty, the lights go out and a man bursts into the room with a flashlight, yelling "Stick 'em up!" Though the people all react differently, they still think it's just a game — until three gunshots are fired. Two of the bullets hit the wall and injure the hostess, while the third one hits and kills... the intruder.

Published in 1950 as Agatha Christie's 50th book and adapted into several movies and miniseries, including a 2005 adaptation on ITV.