Literature / The Murder at the Vicarage 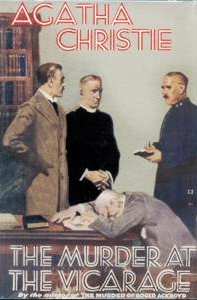 Detective novel by Agatha Christie. This is the first novel (but not the first story) to feature Miss Marple, the harmless old lady who lives at the idyllic village of St Mary Mead and just happens to constantly bump into murders. She is notable for her ability to draw parallels between murder mysteries and ordinary village incidents. She is Christie's second most famous but personal favorite detective.

In the aforementioned St Mary Mead, there is a general climate of harmony and good-will and everyone gets along. Everyone, that is, except Colonel Protheroe, the most disliked man in the village. His daughter wishes he would do a good thing and die, and even the vicar observes that killing him would be a service to the townsfolk. Then, Protheroe is found murdered in the vicar's study. His unfaithful wife and her artist lover both confess to the murder, to the great confusion of Inspector Slack. It's up to Miss Marple to make sense of this story and find out who really did it...

The book is narrated in first person by the vicar, Leonard Clement.

It was adapted by BBC in 1986 with Joan Hickson in the role of Miss Marple and again by ITV in 2004 with Geraldine McEwan as Miss Marple. There is also a 1949 play with Barbara Mullen and a graphic novel released by Harper Collins in 2008.

Christie dedicated the book to her daughter and only child, Rosalind Hinks.

Alternative Title(s): Murder At The Vicarage