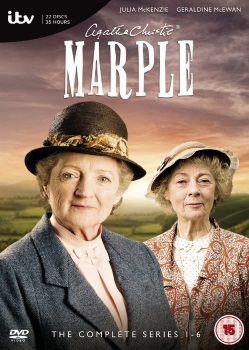 Marple (stylized as Agatha Christie: Marple or Agatha Christie's Marple) is a TV series featuring the amateur detective Miss Marple created by Agatha Christie. The series is made by ITV and has aired six seasons of 3-4 movie-length episodes from 2004 to 2014. Geraldine McEwan played Miss Marple in the first three seasons, succeeded by Julia McKenzie in the remaining three.

The series has not restricted itself to adapting Christie's Miss Marple novels; as early as the second season it began including episodes based on novels featuring other less famous detectives, who in the Marple adaptations are either written out or given secondary roles. Even the episodes that are based on Marple novels are adapted loosely, often changing plot details and even the identity of the murderer.