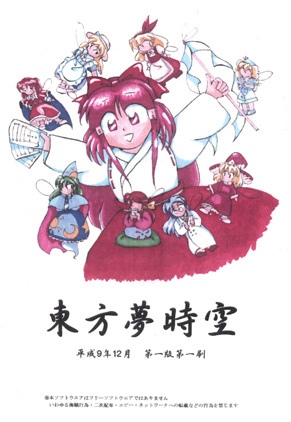 The first attempt at something more multiplayer.
Reimu: "What's with these pamphlets? (How is this some sort of ancient prophecy?) How can ruins have a grand opening? And none of this was here yesterday! How can you all be taken in by something that's so obviously suspicious!?"
Marisa: "Hm, so Reimu's not interested. That must mean..."
Reimu: "...Who said I'm not interested?"
—From the prologue
Advertisement:

Touhou Yumejikuu ~ Phantasmagoria of Dim. Dream is a video game developed by ZUN Soft and published by Amusement Makers for the PC-98 in 1997. It's the third installment in the Touhou Project franchise.

Some strange ruins have appeared near the Hakurei Shrine, drawing a large crowd. Only one person can go inside, so a battle breaks out to decide who it will be.

The game is a split-screen "duel" Shoot 'Em Up inspired by Twinkle Star Sprites, featuring both a story mode and 1-v-1 multiplayer.

In the Windows Touhou series, this game would receive a Spiritual Successor titled Touhou Kaeidzuka ~ Phantasmagoria of Flower View.