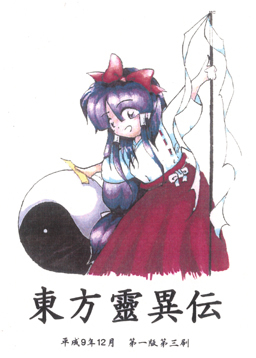 The game that started it all, even if its gameplay wouldn't stick.
Advertisement:

Touhou Reiidennote "Wondrous Tale" ~ Highly Responsive to Prayers is a video game developed by ZUN Soft and published by Amusement Makers for the PC-98 in 1997. It's the first installment in the Touhou Project franchise.

In the mountains of an eastern country lie a number of portals to Hell, Makai, and other terrible places. Long ago, a great gathering of mystics sacrificed their lives to seal away countless demons and youkai, but over time their power has slowly weakened. For generations the miko of the Hakurei Shrine have stood guard, honing their bodies and minds in order to defeat anything that emerges into the human world.

One day the shrine is destroyed by something inhuman, and its only inhabitant Reimu Hakurei enters one of the gates seeking payback. While her normal fighting skills are ineffective on the enemies inside, she's happy to find that hitting enemies with her Yin-Yang Orbs (an ancestral treasure of her shrine) still works quite well.

Unlike the Bullet Hell Shoot Em Ups which would compose most of the series, this game is an Arkanoid clone where you bounce a ball around the screen to hit blocks and enemies. Reimu is capable of redirecting the ball and deflecting small bullets, either by swinging her gohei or by throwing Ofuda. Combinations of inputs allow her to perform a few types of Slide Attack or throw multiple ofuda at once. Finally, a limited number of times she can use a "spirit strike" which renders her temporarily invincible while destroying all bullets on the screen.

If you're viewing this page because you wanted an introduction to Touhou Project then skip ahead to the Windows games starting with Embodiment of Scarlet Devil, because Early-Installment Weirdness abounds (and not just in the gameplay).