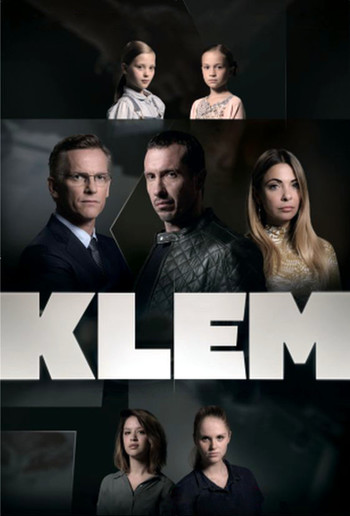 What if you find out that your youngest daughter is best friends with the daughter of a most dangerous criminal... but you work in a high position at the IRS, which means you'd better not be seen with a criminal...
Then you're Stuck.
Advertisement:

Klem (litt.: "Stuck" in Dutch) is a Dutch crime/drama television series that ran from 2017 to 2020 in three seasons. It is about the unlikely friendship that develops between two very different men, and their families.

Hugo (Barry Atsma) is a middle-aged widower, single father of two daughters, and has a top career at the Dutch tax institution (equivalent to the IRS) as a high-functioning government official. This completely straight-laced man inadvertedly crosses paths with top-criminal Marius after the latter is released from prison and both men cross paths because their elementary school-aged daughters are best friends, plus Hugo is platonic best friends with Marius' wife Kitty (who lied all 8 years her husband was in prison, telling everybody that he was "working abroad").

Hugo initially wants nothing to do with Marius, but their lives get intertwined after Hugo saves Marius from getting shot to death by other criminals who feel he owns them money. While Hugo is spending the first season (unsuccesfully) trying to avoid getting involved with Marius, Marius has problems of his own: now that he's released after 8 years in prison, he turns out to have severe debts of a million Euros to several other criminals, who now go after him. Plus, he has a parole officer who watches his every step, a daughter of 8 years old who's never known him but whom he's now trying to form a bond with, and his in-laws hate him.

In the second season, Hugo and Marius are (again) trying to avoid becoming suspects of a murder, while Kitty starts her own restaurant—but is soon foreclosed—and Hugo's teenage daughter Laura gets involved with a much older man who turns out to be bad business.

A third and last season was released in 2019, in which Hugo now has been fired from the IRS and gotten his reputation ruined by Marius' involvement; the men have had a falling-out with each other and are both trying to rebuild their lives.

Series as a whole