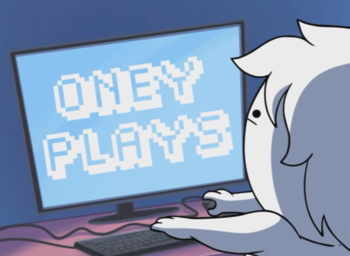 OneyPlays is a Let's Play channel created by Irish web animator Chris "OneyNG" O'Neill. The channel started in 2012 as "Oney's Video Hole," Chris' alternate account for his various non-animation videos. The LP show itself began in May 2014 as a side project, but later became the channel's main focus. His most frequent recurring guests are his friends Ding Dong and Julian (of the game-development team Wan Wan Games

). Other guests have included Ryan and Matt of SuperMega; Arin of Game Grumps; and his friends Corey (AKA Spazkid), Niall and Zach Hadel (AKA Psychic Pebbles) from Newgrounds.

The humor in every video is silly and sometimes (well, okay, very often) borders on offensive, which is part of Chris' style. Fan consensus is usually that the videos are good, and that when a video is good, it's outstanding.

In 2018, Ding Dong and Julian announced that they were taking an indefinite hiatus from the channel in order to focus on their video game company's first major project. Fellow Youtuber Lyle Rath, voice actor Josh Tomar, and Chris' friend and fellow web animator Zach Hadel/Psychic Pebbles have took over their spot as cohosts, with Lyle as an editor. Ding Dong and Julian briefly returned in November 16 2018 before leaving again a few months later due to moving out of state. In April 2021, they guest returned temporarily due to Chris staying with them for most of Spring 2021, with the episodes featuring them appropriately titled "Oney Stays."

as well. There's also a subreddit.

Hey Tomar, what would you do if some weird internet goblin just ran up to you and started listing all these trope examples in alphabetical order?

Tomar: I mean, I would probably listen to him and try not to-
Chris: I would punch him.