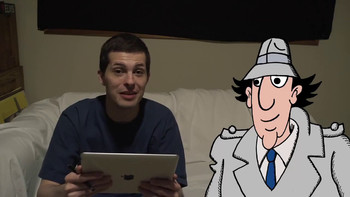 I also like to build brown bricks with Minecrap.

Minecraft with Gadget is a skit video created by Mike Matei on the popular YouTube channel Cinemassacre, although it has since been deleted from said channel due to heavy backlash and criticism. The video was uploaded to the channel sometime in 2012, and depicts what appears to be a fictionalized version of Matei playing and reviewing the wildly popular video game Minecraft alongside an animated Inspector Gadget, from the cartoon series of the same name.

The video opens up with Matei and Gadget having a conversation regarding a "block" of some sort and what it does (likely referring to the one in Minecraft), only for Matei to then turn to the viewers, greeting them and introducing Gadget. Mike then proceeds to ask Gadget if he wants to do some reviews, with the latter inclining, albeit in a rather arrogant way; Gadget suggests they review Minecraft, while falsely referring to it as "Mineycrafta" with Mike correcting him, only for Gadget to then start calling it "Minecrap". Throughout the video, Gadget repeats various jokes including "I love building bricks with Minecrap" and "brown bricks". Eventually, the video ends with Gadget shooting and presumably killing Matei due to the latter talking.

The video garnered a large amount of criticism and backlash, as well as a rather memetic status, with many considering the video extremely unfunny and/or cringe-worthy, or in some cases So Bad, It's Good. All the negative reactions eventually prompted Matei to delete the video from both the Cinemassacre channel and website, with him clearly being rather ashamed of the video and hating any mention of it until relatively recently, whereas he appears to have embraced the video and the Memetic Mutation status it's garnered. Despite it's deletion, several mirrors/re-uploads of the video have surfaced and can be found easily.

In May of 2020, the video was officially re-uploaded