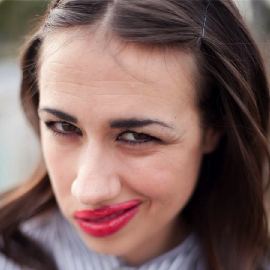 The Greatest SinGer Ever
Advertisement:

, also known by the username MirandaSings08, is a collection of So Bad, It's Good singing videos on YouTube. The character Miranda is known for her below-average abilities and above-average opinion of said abilities, self-invoked Protection from Editors, and a constant ring of extremely red lipstick. In addition to her music ("music") channel, Miranda has a vlog

channel and a Netflix spinoff series, Haters Back Off.

Miranda is a pastiche of similarly untalented girls, and is created and portrayed by Colleen Ballinger. Colleen posts as herself at a third channel, PsychoSoprano

, where she occasionally does split-screen duets with Miranda.