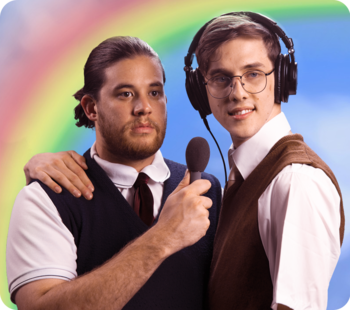 SuperMega is the YouTube channel of Ryan Magee and Matt Watson where the two play video games, perform skits, and make vlogs. It's also where the two post their weekly podcast, the SuperMegaCast. Prior to starting their own channel, Ryan and Matt were editors for well-known YouTubers such as Markiplier and the Game Grumps.

The main features of their channel are their various Let's Play series — including their Animal Crossing (with upwards of fifty 30-minute episodes) and Pikmin (with about twenty 20-minute episodes) series — and their weekly podcast. They often talk about a variety of subjects, often incorporating Vulgar Humor and Black Comedy.

Their channel can be found here,

and their Patreon can be found here.

Tropes found on the SuperMega channel