Lets Play / Over The Gun 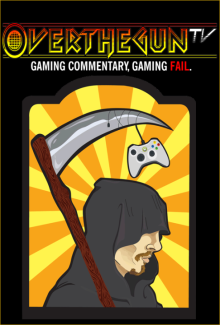 Nothing says "Badass" like a Grim Reaper with a beard. Who smokes.
"Alright dudes, how's it going?"
Advertisement:

is a Let's Player specializing in Blind Runs. His playthroughs are called "HTSF" or "How to Successfully Fail" which pretty much describes what you'll find: going through the game while making some very hilarious mistakes. The HTSF is typically organized of sets (which separate playing sittings) and parts (due to YouTube's time limit). Has a strong British accent and a fairly foul mouth.

Over recent years, he has ventured away from YouTube for the most part, trying out other services such as Blip.tv. Unfortunately, his Blip.tv account has been deactivated. He now focuses livestreaming most content on Twitch.tv, with streams being uploaded to YouTube sometime later.

Playlists can be found here

Games that OverTheGun has successfully failed:

Tropes that apply to OverTheGun:

I hope you enjoyed that guys and I'll catch you next time. See ya dudes!