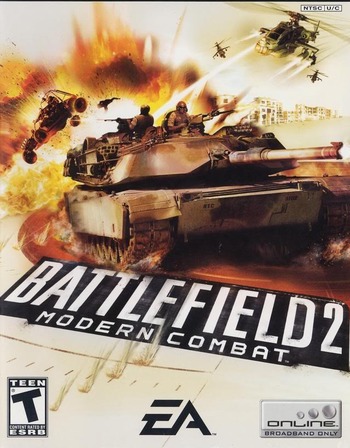 The battle has come to consoles!
Advertisement:

Battlefield 2: Modern Combat is a First Person Shooter and a spin-off of Battlefield 2 developed by DICE for the Playstation 2 and Xbox released in Octuber 2005 and later for the Xbox 360 in April 2006.

Similar to its PC counterpart, the story is set 20 Minutes into the Future in a war between NATO and the PRC in the Eastern European/Central Asian country of Kazakhstan after peace negotiations between both factions are interrupted by an unknown assailant.

Unlike its PC counterpart, the gameplay is way more streamlined and arcade-y and has a full-fledged singleplayer campaign with an unique "hotswap" mechanic that allows the player to move from to soldier to soldier with press of a buttom.

Its multiplayer mode allowed 24 players to duke it out with a variety of vehicles such as light transports, tanks and helicopters, and was one of the most online-featured console games of its time with the implementation of Clans, Leaderboards and unlocks. However, its Xbox and Xbox 360 servers were closed in 2009 and its PS2 servers followed in 2014.

Its commercial success led to the development of the Battlefield: Bad Company duology, a sort of Spiritual Successor released in 2008 for the Playstation 3 and Xbox 360.

Be Careful, there are tropes on your radar.