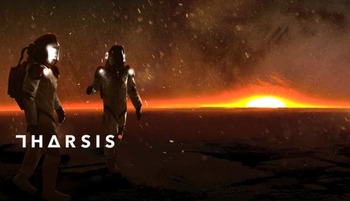 I would like to die on Mars. Just not on impact.
"Tharsis is about being in a rolling state of mental anguish, knowing that every positive action you take is also sowing the seeds of your own destruction."
— Alec Meer of Rock Paper Shotgun chronicles his mental breakdown en route to Mars

is a dice-based strategy game for Windows, Mac OS, and Playstation 4, released in January 2016 by Choice Provisions. It was designed by Zach Gage, best known for his mobile game Spell Tower, and his collaborative work on Vlambeer's Ridiculous Fishing and Getting Over It with Bennett Foddy.

Your task is to guide the crew of the ill-fated spaceship Iktomi on a mission to investigate a mysterious signal originating from the Tharsis region of Mars. Character's available actions are dictated by dice rolls, and along the way you will have to contend with a myriad of dangers, dwindling food supplies, and the ever-present threat of the space crazies.