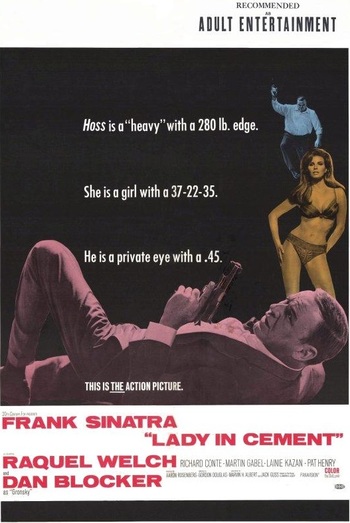 Lady in Cement is a 1968 neo-noir detective film, directed by Gordon Douglas and starring Frank Sinatra, Raquel Welch, and Dan Blocker. It is a sequel to the 1967 film Tony Rome.

While diving off in the Miami coast, private investigator Tony Rome (Sinatra) discovers a dead woman, her feet encased in cement, at the bottom of the ocean. He thinks of the incident as a random encounter, until Waldo Gronski (Blocker) hires him to find a missing woman, Sandra Lomax. Rome's subsequent questioning makes him come across Kit Forrester (Welch), a woman whose party Sandra Lomax was supposed to have attended, with whom Rome begins a romantic relationship. The situation leads Rome to delve deep into an investigation in which he finds almost no answers.