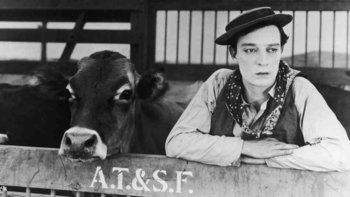 Go West is a 1925 feature film starring, directed by, and written by Buster Keaton. Buster plays "Friendless", a drifter who hops a freight train going west because he has nothing better to do. He winds up at a cattle ranch in the desert and is predictably inept at handling cows, but makes good friends with one particular cow called Brown Eyes. After he plucks a stone out of her hoof, Brown Eyes follows him around constantly, at one point saving Friendless from a charging bull. When Brown Eyes is packed off for slaughter, Friendless must spring into action to save her, while getting all of the other cows in the herd to the stockyards.

The Marx Brothers starred in another Western spoof titled Go West but it's not a remake.