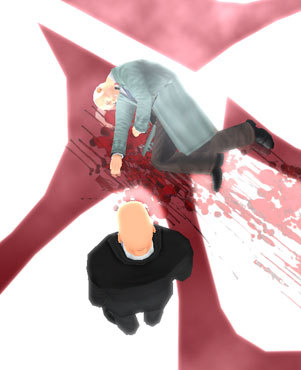 When we last left our hero...
Advertisement:

Hitman: Contracts (2004) is the third game in the Hitman series by IO Interactive, though it's really more of a mini-episode set between levels from the (then) upcoming Blood Money.

It also serves as a remake (for all intents and purposes) of most of the missions from Codename 47, now using the improved game engine from Silent Assassin. There are more ways to win, along with a brand-new sniper's nest in most levels.

The story finds 47 in a compromising position (shot in the gut) as he starts experiencing bizarre fever dreams. Of course when you get right down to it, his brush with the Reaper is just an excuse to don the pitch-black suit, prepare the fibre wire and reload the Ballers.

The first half of the game consists of flashbacks to past assignments: a Romanian bondage club, an illicit weapons factory in Siberia, and a countryside manor in The Agency's home turf of England. The middle chapter revisits some old locations from the first game, namely Rotterdam, Budapest, and Hong Kong. The last mission brings 47 back to the land of the living—also known as Paris, where the police are moments away from capturing him.

For tropes shared with the original, see Hitman: Codename 47. Do not confuse it with the much later, eighth entry into the same franchise; Hitman 3, which is the followup of the story started in Hitman (2016) and Hitman 2.