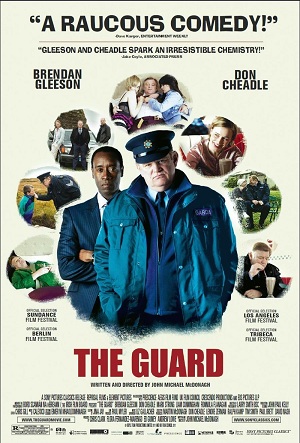 The Guard is a 2011 Irish action-comedy film. Starring Brendan Gleeson as Sergeant Gerry Boyle and Don Cheadle as FBI Agent Wendell Everett, it is based in the west of Ireland. When a murder victim turns up, Gerry soon discovers that he was part of a drug smuggling ring. When his rookie partner disappears, Gerry is asked by the man's wife to find out what happened. He then gets embroiled in the dealings of a drug smuggling ring and must crack the case.

The directorial debut of John Michael McDonagh. See Martin McDonagh for his brother, writer/director of In Bruges and Seven Psychopaths.