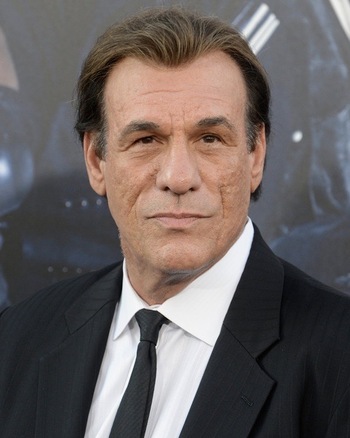 Born of Italian-American parents, he trained in both dramatic arts and classical singing. Acting-wise, he's appeared in TV and film since the late '70s but is probably best remembered for his supporting and villainous roles in action films of the '80s and '90s. Among his best known roles are ruthless drug lord Franz Sanchez in the bloodiest James Bond film to date, Licence to Kill, and FBI Agent Bailey Malone on the NBC crime series Profiler.

Davi is also an accomplished opera singer and has even veered into jazz crooner territory since The New '10s. No less an authority than Quincy Jones said of him: "I have never heard anyone come this close to Sinatra's sound and still be himself. Many try, but Robert Davi has the voice, tone, the flavor, and the swagger." Coincidentally enough, Davi made his screen debut alongside Sinatra in the 1977 Made-for-TV Movie Contract on Cherry Street.