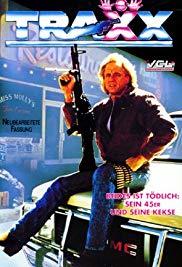 Traxx is a 1988 American comedy film starring Shadoe Stevens and Robert Davi that's a parody of the Action Genre.

Traxx is an international mercenary who has grown tired of his job. Desiring something else, he takes up the life of a baker. Running out of money, he decides to put his skills to use once more after being offered lots of cash by a city to clean up its streets. However, the local lowlifes aren't so compliant...