Film / Son of the Pink Panther 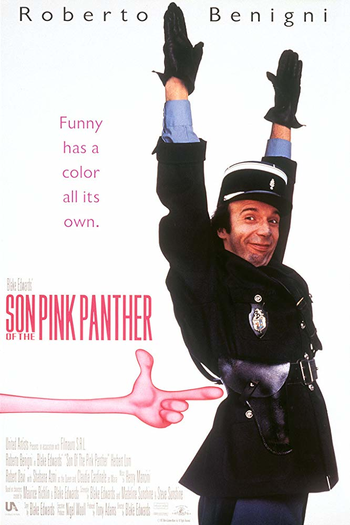 He's clumsy and he's clever. He's courageous and he's commited. But most importantly, he's a "Clouseau"!
Dreyfus: I knew a man once named "Jacques". When he died ten years ago, I said "Thank god there can never, never be another one like him... and then I... I met your son!"
Advertisement:

Son of the Pink Panther is a 1993 comedy and crime drama film and the final installment in the original The Pink Panther franchise, as well as the last film directed by Blake Edwards. Just like the last one, this film once again tried to continue the series with a new bufoonish lead. This time, Roberto Benigni plays Jacques Gambrelli, the equally-inept son of Clouseau.

In Lugash, the young Princess Yasmin is kidnapped by Hans Zarba and his crew, who demand that her father, King Haroak, renounce his throne. The case is assigned to the once-again-Commissioner Dreyfus, who unknowingly runs into Hans and his crew on the road. They’re both accompanied by a rather unexpected visitor; a dopey French gendarme named Jacques Gambrelli, prone to many familiar mannerisms and quirks that make Dreyfus tick. After meeting with Jacques’ mother, Maria (Clouseau’s love interest in A Shot in the Dark), Dreyfus’s suspicions are finally answered;

Jacques is indeed the Illegitimate son of the famed Chief Inspector Jacques Clouseau, a fact that neither father or son were allowed to know.

When Jacques is assigned to the kidnapping case, filled with new-found determination, he must fill the shoes of his infamous father’s bumbling legacy as “Detective Jacques Clouseau Jr.” to rescue Yasmin from the clutches of Zarba and his gang.