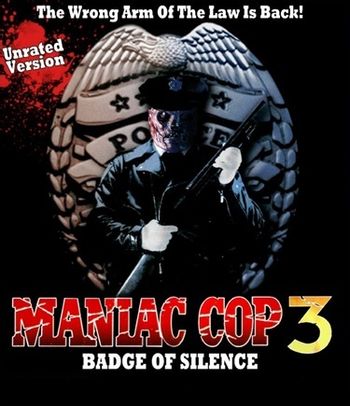 The final movie in the Maniac Cop trilogy, released in 1993.

Cordell is resurrected from the dead by a voodoo priest who wants him to work for him. But Cordell has other plans, as he learns about a certain female officer Sullivan who was framed for a crime that she didn't commit. Seeing a kindred spirit in her, Cordell starts killing everyone involved with the case, from the real perpetrator of the crime to the doctors who plan to cut the life-feed from her now-comatose body. After he is done, Cordell wants to make Sullivan his bride. Meanwhile, McKinney tries to put end to the mayhem.