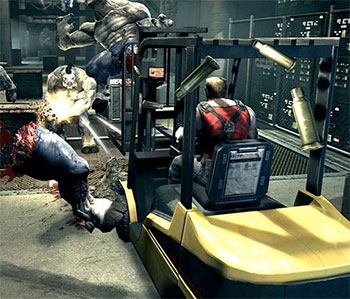 "Fork you!"
"He tried to kill me with a forklift! (Olé!)"
— Joel and the bots watching Fugitive Alien
Advertisement:

Forklifts; they're tough, manly, and working-class. They're commonplace all over the world and essential for large warehouses; they come in many types and sizes and combine all the joys of driving with carrying ridiculously heavy items suspended just above head-height.

They're also dangerous, intentional or not, as this informative German Safety Video parody shows.

note Caution, it gets a bit Black Comedy gory towards the end. This trope is all about using them as a type of weapon.

Alternative Title(s): He Tried To Kill Me With A Forklift