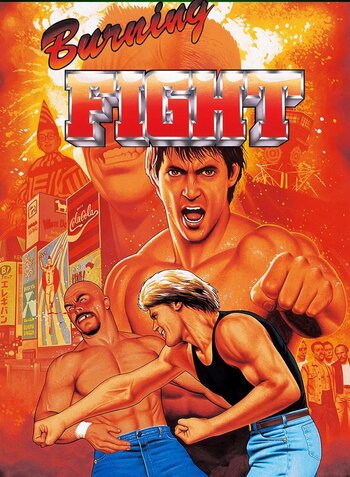 Even the poster is burning...
Advertisement:

Burning Fight is a 1991 arcade action game released by SNK, and the company's response to the Beat 'em Up craze in the late 80s and early 90s.

The plot (taking some inspirations from Black Rain) is charactestically threadbare; players assume the roles of Duke and Billy, two New York detectives on the trail of a mob boss, Casterora, who had escaped to Japan and joined forces with the local yakuza. They then team up with Ryu, a Japanese police officer and karate expert, leading to the trio kicking and punching the daylights out of the Osakan underworld.

Duke would later make a cameo as one of the Another Strikers in The King of Fighters 2000.