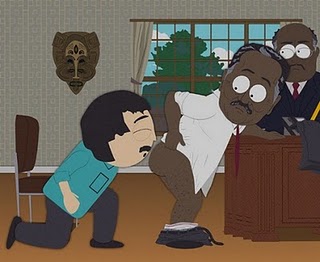 With Apologies to Jesse Jackson indeed!
"Derk was the nyght as pich, or as the cole,
And at the wyndow out she putte hir hole,
And Absolon, hym fil no bet ne wers,
But with his mouth he kiste hir naked ers."
— Geoffrey Chaucer, "The Millers Tale" (see below for translation).
Advertisement:

Like Literal Ass-Kicking, certain rear-end related sayings aren't always figurative. Often used as a form of embarassment, Literal Ass-Kissing is a rather ultimate form of humiliation or submission.

A common variant is the Literal Genie version, when someone isn't familiar with the idiom and assumes it's an order.

See also Literal Ass-Kicking. Compare I Kiss Your Foot, which is a somewhat more dignified gesture of submission.