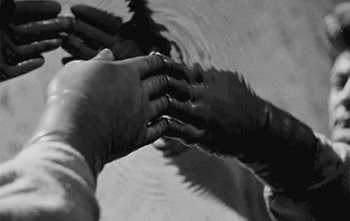 Orpheus goes through the mirror.
Advertisement:

Orpheus is a 1950 film directed by Jean Cocteau.

It is, of course, an adaptation of the Orpheus story from Classical Mythology. The story is given a setting update to modern-day France, with Orpheus (Jean Marais) being a poet of great renown. Orpheus is idly relaxing at one of those coffee shops so adored by Paris hipsters when a Rolls-Royce pulls up. Exiting from the Rolls are Cegeste, a handsome young man and rival poet to Orpheus, and a mysterious woman clad in black called "Princess". Cegeste, who is roaring drunk, insults Orpheus. A fight breaks out, escalating into a massive brawl. Cegeste staggers out of the frenzy, and is promptly run down and killed by two motorcycles in the street.

Orpheus goes to the aid of Cegeste, only for the princess to appear and insist Cegeste be put into the car and Orpheus come as a witness. They then drive not to the hospital, but to the princess's Old, Dark House chateau. That's where things start getting weird. The journey to the chateau is shown in photographic negative. Strange nonsensical messages, highly reminiscent of the coded messages sent to La Résistance from England during the Nazi occupation, start coming over the radio. The Rolls is accompanied by the same two motorcycle goons that ran over and killed Cegeste. It's revealed that the princess is a supernatural being, an angel of Death. She re-animates Cegeste, and the four of them—the princess, Cegeste, and the two motorcycle goons—walk through the mirror, into some sort of alternate world.

Orpheus, shocked by this bizarre turn of events, tries to step through the mirror as well but can't. He collapses in a faint against the mirror. He awakens not in the chateau, but somewhere outdoors in the wild, where he's picked up and taken home by the princess's chauffeur Heurtebise. Heurtebise is soon revealed to be a ghost. Meanwhile the princess has returned from the afterlife, and she has some plans that involve Orpheus's pretty wife Eurydice.

Received a quasi-sequel, The Testament of Orpheus, which was Cocteau's last film. Compare Black Orpheus, another modern-day Orpheus tale made just a few years later and set in Brazil.