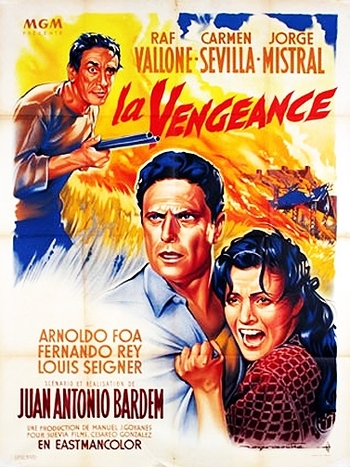 La venganza is a 1958 film from Spain, directed by Juan Antonio Bardem.

The rather vague time frame is whenever mechanical reapers first began to catch on in Spain. Juan Diaz has just come back to his village in the hills of Andalusia after serving a ten-year prison sentence for murder. He was imprisoned for killing one Salvador, a member of the (unnamed) rich family in town that lives in the "Old House" on the hill. No one is sure who pinned Salvador's murder on Juan, but Salvador's brother Luis is quite nervous about Juan's return to the village.

Meanwhile, it's reaping season, and Luis is organizing a group of villagers to go around the country looking for wheat fields that need reaping. Juan and his sister Andrea go along, with Andrea urging Juan to take revenge against Luis and kill him as soon as Juan is sure that Luis was the man who framed him. However, there's one thing Andrea didn't anticipate: falling in love with Luis.