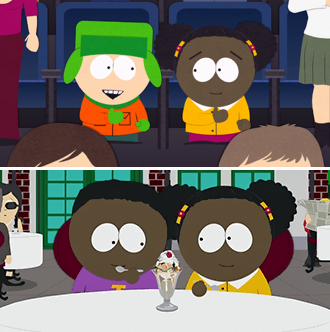 "And they are a perfect match for us... Okay, what I mean is one woman is white and the other just happens to be of the African-American persuasion."
— John Hamilton of 7th Heaven, who is black, to his white roommate
Advertisement:

If there's a love triangle with a man and woman of the same minority race and another person who's white, the people of the same race will be meant to be together. Differs from a Token Minority Couple in that there the only races that matter are white and non-white but this is about the two people matching.

White women always like black men and white men want Asian women but some times couples are just happier with someone who's the same race, nationality, or even religion. It might be a conscious choice of the characters saying that they feel obligated to be together because they're both the same. They might feel entitled to be together but a white person tries to keep them apart but fails and so we see the strength of their relationship. To emphasis the difference between the white person trying to keep them apart and the black people, the white one is probably blonde. It might be done as a black on black Token Minority Couple as the Token Black Friend making a Beta Couple with another black person.

This is one trope we can partially blame The Hays Code for. Prior to the code, interracial pairs (particularly Black/White) had been done before (not perfectly, but done nonetheless), but the Hays Code forbade any form of interracial relationships until 1956.

Usually Salt and Pepper are not a romantic couple, but a friendship. Contrast Maligned Mixed Marriage.