Film / Save the Last Dance 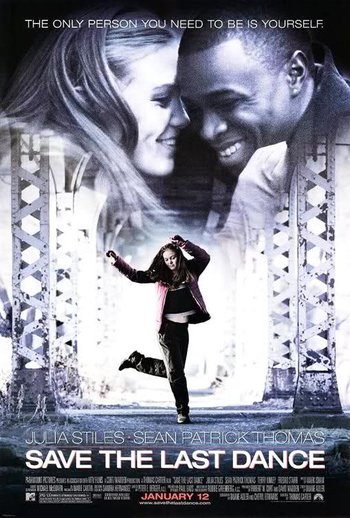 "We spend more time defending our relationship than actually having one."
— Sara Johnson
Advertisement:

A 2001 romantic drama directed by Thomas Carter, starring Julia Stiles and Sean Patrick Thomas, Save the Last Dance is widely regarded as a modern teen classic.

The story, which parallels Romeo and Juliet, is about a white ballerina named Sara (Stiles) who moves to inner-city Chicago to live with her distant father after her mother dies in a tragic accident. At her new school, in which she is one of the few white students, she befriends and falls in love with Derek (Thomas), a popular black student with a bright future, but their romance meets some obstacles from some of his friends who don't approve. Derek, a talented hip-hop dancer, teaches Sara his style of dance and inspires her to continue ballet and audition for Julliard.