Film / Bringing Down the House 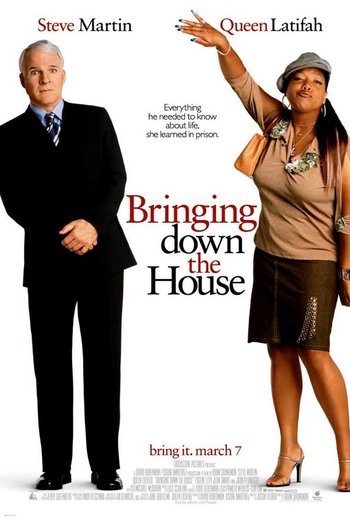 Bringing Down the House is a 2003 American comedy film, written by Jason Filardi and directed by Adam Shankman. The film stars Steve Martin and Queen Latifah.

Peter Sanderson (Steve Martin) is a workaholic tax attorney corresponding with an online friend known only as "lawyer-girl." On their first blind date, Peter learns that "lawyer-girl" is Charlene Morton (Queen Latifah), a plus-sized, wrongfully convicted bank robber claiming her innocence who wants Peter's help in getting the charges dropped. Peter also must deal with Virginia Arness (Joan Plowright), an eccentric billionaire, to bring her business to his firm, as well as competitive colleagues and bosses. His neighbor, Mrs. Kline (Betty White), who happens to be a sister of one of the senior partners, is a nosy bigot. Peter attempts to juggle these issues as well as reconcile with his estranged wife (Jean Smart) and children (Kimberly J. Brown and Angus T. Jones).

Not to be confused with the book of the same name, which was adapted into the movie 21.