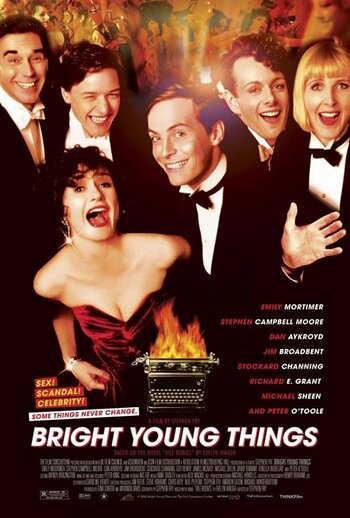 "God gave you two legs and an immortal soul in the capital city of the largest empire the world has ever seen. Are you going to spend it sucking up cocktails?"
—Lord Monomark
Advertisement:

Bright Young Things is a 2003 British period comedy-drama film written and directed by Stephen Fry. The screenplay was based on the 1930 novel Vile Bodies by Evelyn Waugh, which was in turn loosely based on and satirized the aristocratic and bohemian society members known as the "bright young people".

The film follows aspiring author Adam Fenwick-Symes and his fiancee Nina Blount. His novel Bright Young Things is withheld at customs for being too racy, and he finds himself in a precarious financial situation and fearing he will be unable to marry. Meanwhile, he and Nina live life as part of a young and decadent crowd who indulge in partying, alcohol, cocaine and gossip. However, things are not as carefree as they may seem at first.