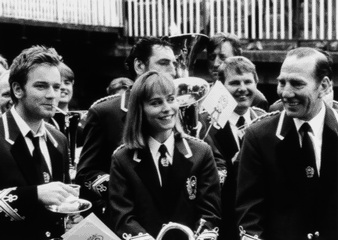 Brassed Off is a 1996 British comedy-drama written and directed by Mark Herman. It is most famous for its (understandably) brass band soundtrack, recorded by the Grimethorpe Colliery Band.

Grimley, a small town Oop North, is based around two things, the colliery (Oop North-ish for "coal mine") and the colliery band. Gloria Mullins (Tara Fitzgerald), the granddaughter of the late bandmember Arthur Mullins, moves back to Grimley, and becomes the first female band member under the direction of Danny Ormondroyd (Pete Postlethwaite) while reuniting with her former lover and tenor horn player Andy Barrow (Ewan McGregor). At the same time, the mine is threatened by closure, which would result in widespread local unemployment and could effectively kill the town.

Brassed Off provides examples of:

"All right then, lads and lasses. Land of Hope and bloody Glory, eh?"