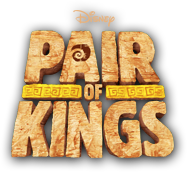 Pair of Kings (2010-2013) was a Disney XD Original Series, which revolved around Boomer (Doc Shaw) and Brady (Mitchel Musso) orphaned twin brothers who soon discover that their parents were rulers of an island called Kinkow, and the twins become the next rulers as well.
Advertisement:

The third season introduced Boz (Adam Hicks) as a long lost brother to Boomer and Brady, thus making the twins actually triplets. After Brady leaves the island following a breakup with Mikayla (it's explained in the show that he was allowed to leave as he wasn't one of the "true" kings note In reality, Musso had been kicked off following a DUI. Oddly he kept his role on Phineas and Ferb). Boz takes his place as co-king of the island after a storm shipwrecks him and his people of a neighboring island near the kingdom.

Pair Of Kings provides examples of: